Wanted to quickly update the AoT "TOP PICKS" that triggered this week. It was a super volatile week which is very typical of October but as you are going to see the AoT "Top Picks" did quite well despite the volatility BUT you needed to be proactive and work to MOVE STOPS , TRIM gains, and/or actively manage stops losses as many of the triggered setups did work but you needed to be quite involved when the market is swinging wildly from one direction to the other.

Hopefully, they were helpful to you. As always, questions, feedback, comments are welcomed! 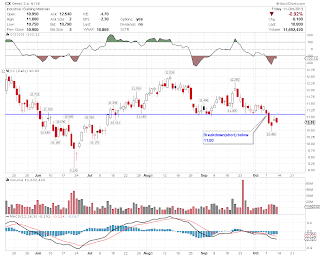 CX : a short setup which triggered below $11 and hit the 10.50 first target before reversing on mrkt rally. 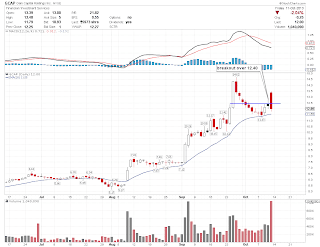 GCAP : triggered over 12.50. Ran up about 8% before reversing lower today. 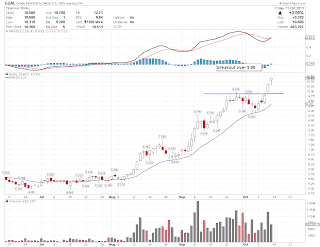 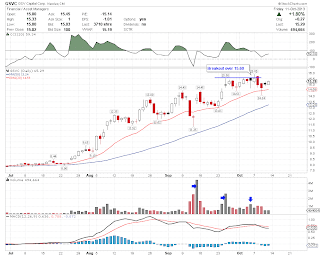 GSVC: triggered and went up 2.2% before reversing lower as market sold off hard mid week. 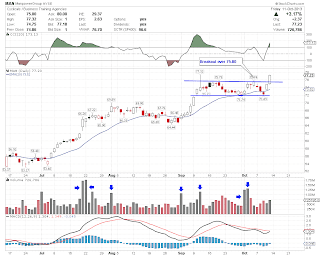 MAN: it held up thru out market's selloff and triggered friday morning and ran up 2% . Still looks very strong 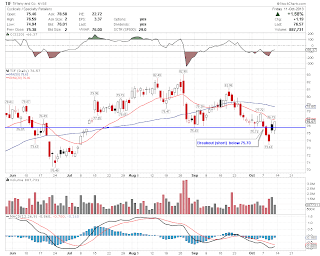 TIF: short setup triggered below 75.70 and dropped 2.7% before reversing on mrkt rally. 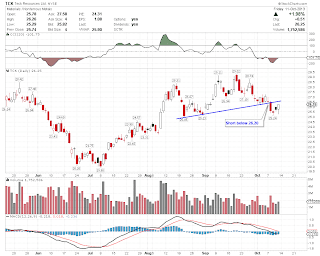 TCK : Short setup triggered and dropped 3.6% before reversing with market's rally late in the week. 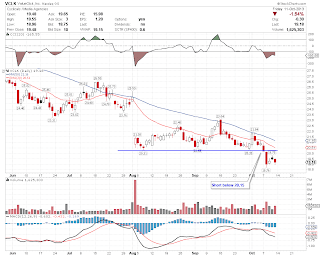 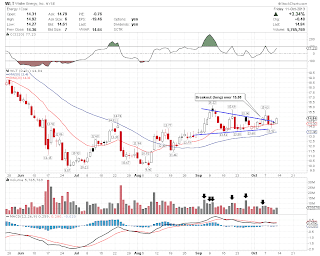 WLT:  long triggered over $15 and ran up 4.40% before falling on market's early week selloff. 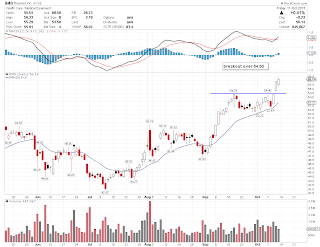 RMD: triggered and is up 3.30% since then. Still looks strong. 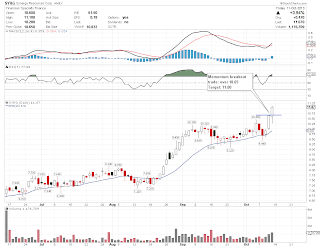 Check out this video on "HOW TO PLAY The AoT BREAKOUTS"

Here's some cool feedback i got today from an AoT member

"Just letting you know that I appreciate your work and like your short term approach.
I have plenty of successful trades using your work.  And, everything goes well as long as I respect the stops on the downside for the ones that don't work out.
Sometimes I will trail stops on winners on part of the position (for a while) instead of always selling out.   Obviously, that's good sometimes and not others.  In this case, it worked.
As one example, I bought SBGI at 32.15 and sold this morning at 34.01.
Also, you helped me get into NXST just below 37 back on 9/18.  I still have part of that position.
I find that it helps to keep an eye on your recommended stocks well after the recommended date.  Often, the winners will create new buy  opportunities in the following weeks (at least in a bull market).
Yes, I make plenty of mistakes too (my goal is not even to be right 50% of the time), but living to fight another day is the key.
Thanks again for the ideas you generate"

Posted by Stewie at 3:25 PM No comments:

So what exactly is an 'AoT TOP PICK' you ask?

These stocks are VERY carefully selected after spending several hours of scanning/charting/research for the "HIGHEST QUALITY" setups i am able to find in my "master watchlist"(usually from my 'Power Earnings Gap' watchlist. These are very selectively chosen stocks that have the "HIGHEST probability" of exploding higher or breaking out(imminent breakouts). I also provide an 'ideal entry" price for entry(the trigger price), if when a stock triggers, AOT members are alerted in the @AOTtrades and also via email and SMS that a trade has triggered!

The entry prices are very carefully chosen to take advantage of specific setups!

From this small nightly list 2-4 stock setups, I pick out what i think is the single "BEST OF THE BEST" idea if you will.... That's the 'AOT TOP PICK' !!

Below you'll see the UPDATED charts of this week's 'AOT TOP PICKS' that triggered entries and how they worked out for ART OF TRADING members shortly after triggering!

For the first week of October 2013 there was a total of 8 'AOT TOP PICKS' that triggered entries.

Here are the charts! 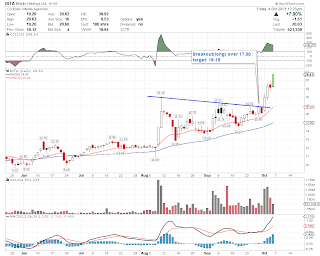 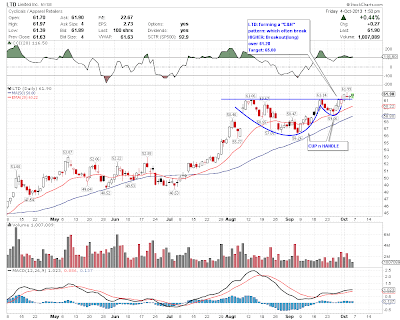 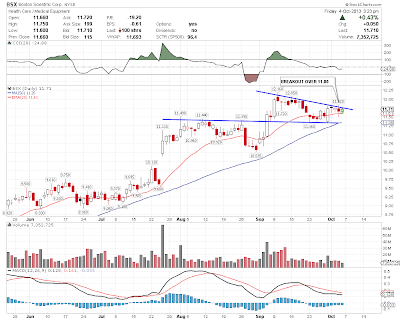 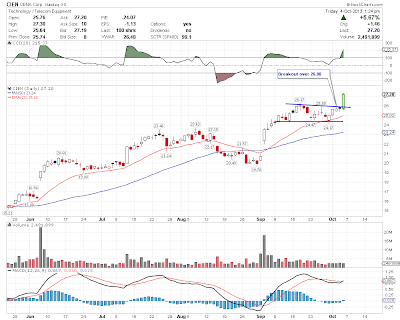 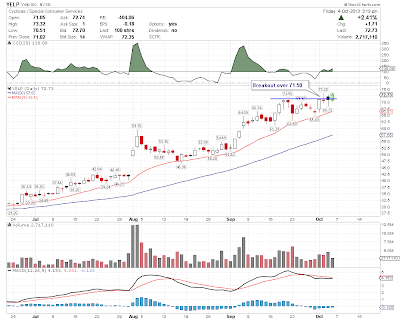 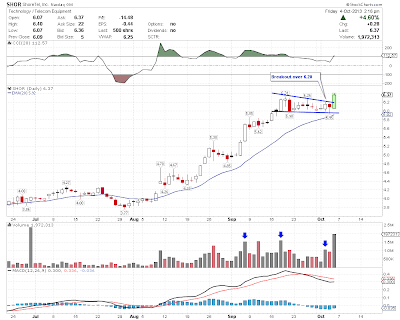 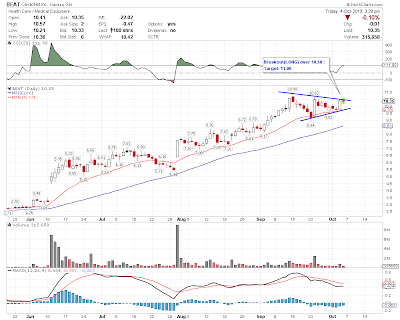 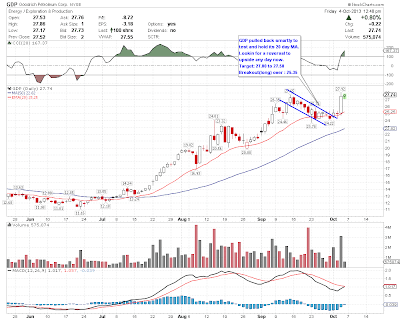 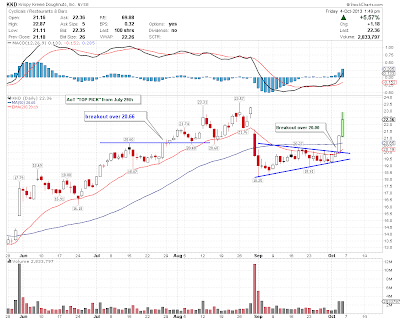 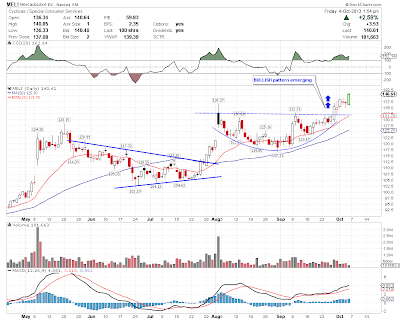 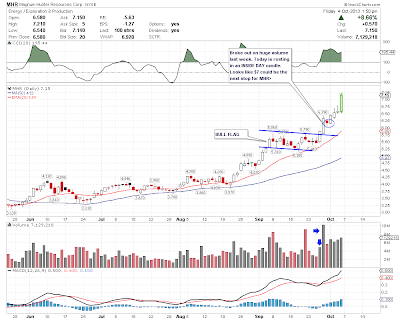 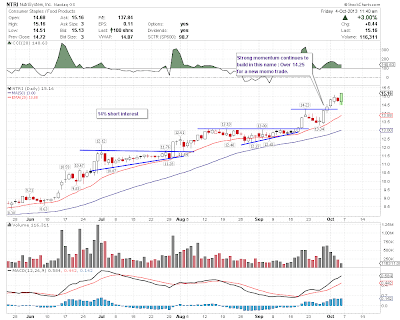 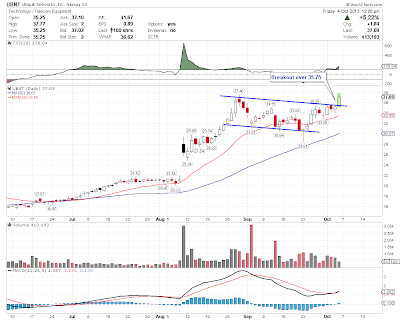 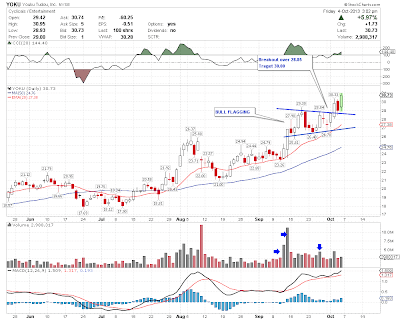 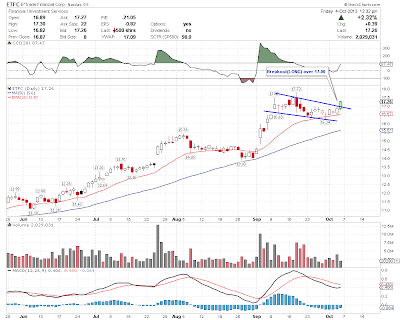 Some feedback recieved this week from AoT members

Hey Stewie,You da man!  Just letting you know after yesterday's action in the overall market and all this chop and slop with DC involved, I took it nice and easy today and only took 3 setups:  CIEN, DANG and UBNT.I bot em right at the breakout levels, peeled 1/2 off when up $1, then booked my 2/3 on UBNT at $37.  Still have 1/3 on UBNT and will hold DANG.Already booked on 2 and paid for my AoT membership for 6 months.  Well done and thanks a million.I have actually been following you in the public domain and studying your charts since 2010 or so, I think, and love your style and your awesome charts.  I'm so glad to be a member now.Thanks again, and have a great weekend.  And stay off that ankle!Walter  (Brand new AOT member , started this week!!)

Stewie,
Great 4 days for me as I started with your service Tuesday and plan to subscribe for the long term.  Made money every day....  Not looking to get rich but don't want to go back to a 9 to 5 job either.
Thanks for the great trades and being a great guy.  Good guys sometimes do finish first.

Have a great weekend.

As always, if you have any questions, comments, feedback etc, email me or tweet me !
I'm always willing and really enjoy helping!

Join The 'ART OF TRADING' Today!

Posted by Stewie at 1:11 PM No comments: