The Calm Before the Storm

I wanted to start the 2018 year writing about a setup in OSTK I mentioned on twitter earlier this week...

Now, when you first look at the chart of OSTK, surely some of you will be scratching your heads saying "what the hell did he like so much about this one?"

First of all, a fellow ART OF TRADING member ( @GaelicAidan )  emailed me and asked for a 'Chart Request' for OSTK....

I did a chart analysis on it and here's the OSTK chart I tweeted out on Tuesday morning, both to Art of Trading members and on my @TraderStewie public twitter stream !


There was a lot to like about this setup if you knew what you were looking at and that's exactly I intend to do today, to TEACH YOU how you can spot some of these powerful setups BEFORE they start rampaging and catch them while they are still "sleeping" so you can buy them during the "calm" phase and reap the rewards during the "storm" phase!

Here's the exact OSTK chart I sent out to AoT members and also my twitter followers on that Tuesday morning.... 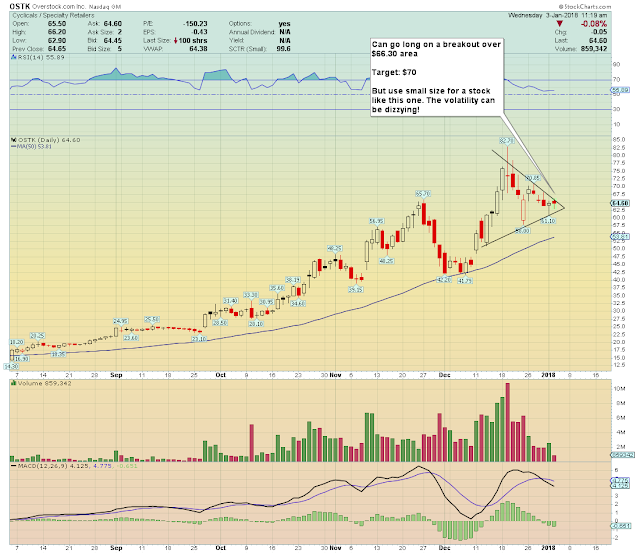 Notice how OSTK, which is a stock I've come to know quite well over the last few weeks since it's been a fun stock to trade with that big surge in momentum in Q3 2017 .... Also, important to note, that OSTK has over 50% short interest!! That's just INSANE to think that more than half of the shares outstanding are sitting in SHORT POSITIONS!


This stock has SHORT SQUEEZE written all over it!

Notice how OSTK has made several BIG dramatic run ups lately and a couple of times, OSTK make equally as dramatic pullbacks too! This stock is definitely NOT a "slow mover" and it is definitely NOT for the faint of heart... OSTK is a trader's dream IF you play it right.

Watch OSTK chart closely in the first 2 weeks of December, made a gigantic run up from $42 to $82! It basically doubled in 2 weeks! Now, keep in mind we are not talking about a penny stock here!!

Now, watch the OSTK chart very closely and you'll see that after topping out in mid December, it made a big retracement from $82 to $56.... then it tried to make a bounce/attempt for a couple of days before "faltering" for a few days.... NOW, those "faltering" days are the KEY to this setup....
The stock deceptively put many traders to "sleep" as it basically went into a 4-5 day "coma". The stock literally went to sleep the last 4-5 days and most traders on twitter whom I follow stopped talking about OSTK(usually a sign, traders have moved on to other names which are more active)....
But, I've seen this way too many times and know fully well, stocks with huge short interest like OSTK do not stay "quiet" for too long before they start getting rowdy and wild again!


Here's two tweets I sent out on Wednesday to AoT members and also on public twitter.

Here's what OSTK chart was doing on the intra charts..... note, the "small liftoff" candle at around 12;50PM that broke out of that mini intra-day sideways consolidation.... When I saw that candle perking up, I started to feeling a better about the prospects of this setup... Felt like this stock was about ready to turn the corner for real and start something special ... 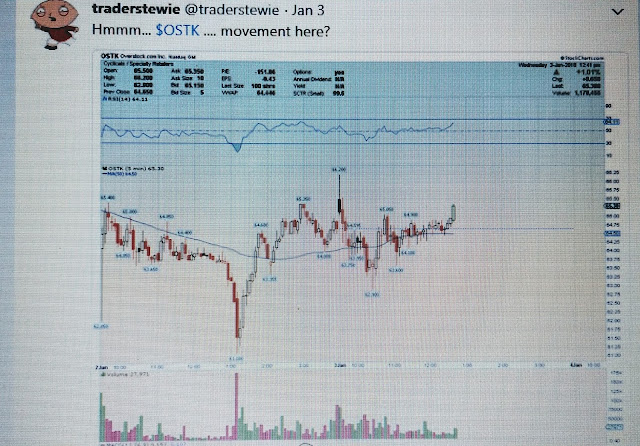 When stocks with HUGE short interest like OSTK go thru a "quiet" period for a few days(especially when they have been running HOT recently), you should know right away, that we have a "calm before the storm" scenario brewing and be READY! 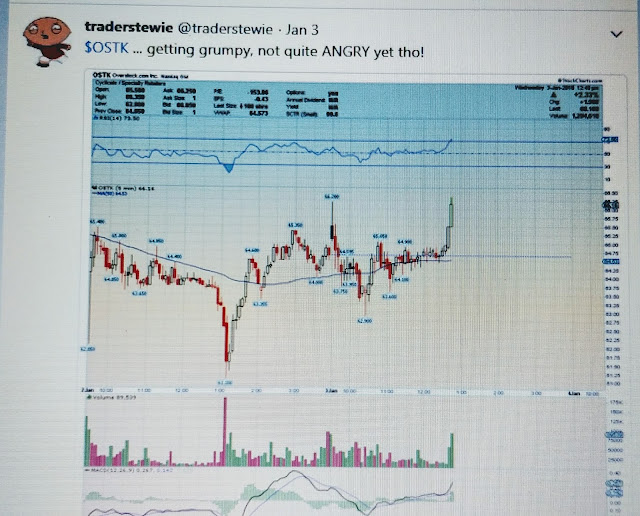 Look at that EXPLOSIVE move!! This stock is in full blown ATTACK MODE!
What ever you do, DO NOT SHORT an "angry" mover like this!
Stocks that move like this usually go on to run much much HIGHER! 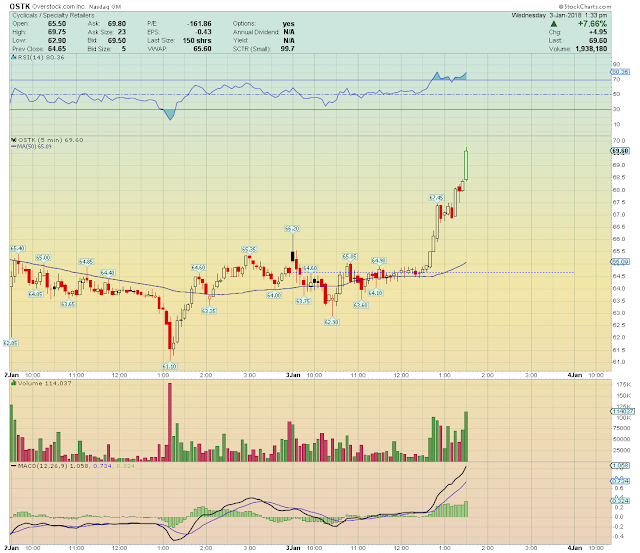 And here's what OSTK looked like on the daily charts....

As you can clearly see in the chart below, OSTK broke thru that symmetrical triangle's $66.30 breakout area spot with NO effort what so ever....that told me, this stock is about to get really WILD! 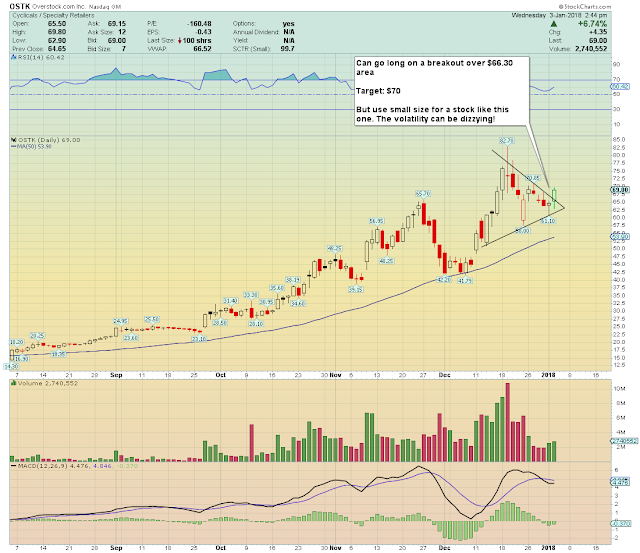 Trades like this OSTK are only as good as the VOLUME that pours into them, so for us to have true confidence that we have a BLOCKBUSTER trade, we need to see VOLUME! VOLUME! VOLUME! The more, the better!! .... so naturally I was watching the intra-day charts closely on OSTK with great intent .... What I wanted to see was OSTK's volume ramp up BIG TIME in the final hour and especially going into the close that day.... that told me that a fraction of the heavy short positions in that stock are surely starting to "panic cover" in droves!! "Panic covering" is a long trader's best friend! Panic covering on big volume means the stampede has only just started and likely to continue up for at least 1-2 days minimum, if not 3-4 more days!

Here's how OSTK closed on that Jan. 3rd 2018 and I made sure to tweet it out to let the traders who are still long in OSTK to hang on as more gains were likely coming the following day.... 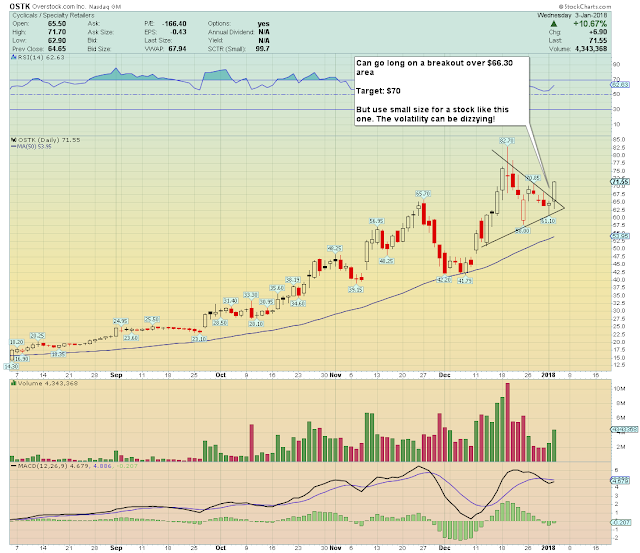 ....Here's a post-market breakdown of what I was seeing on the INTRA-DAY charts.... 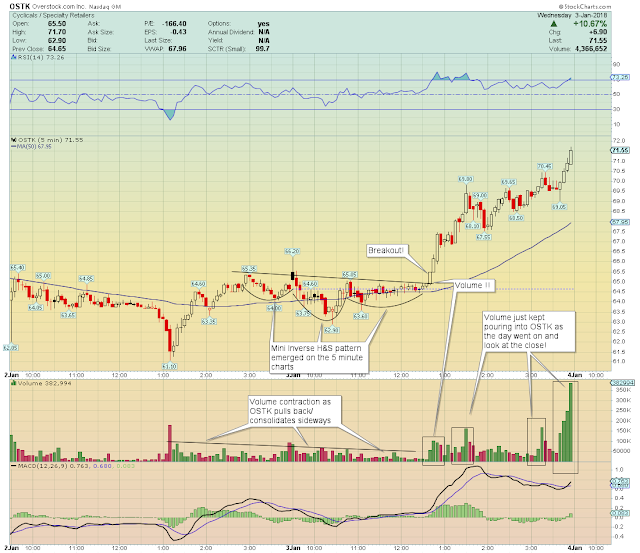 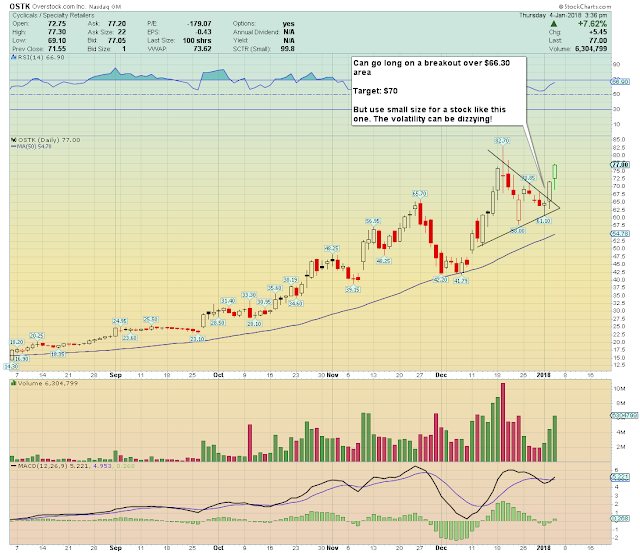 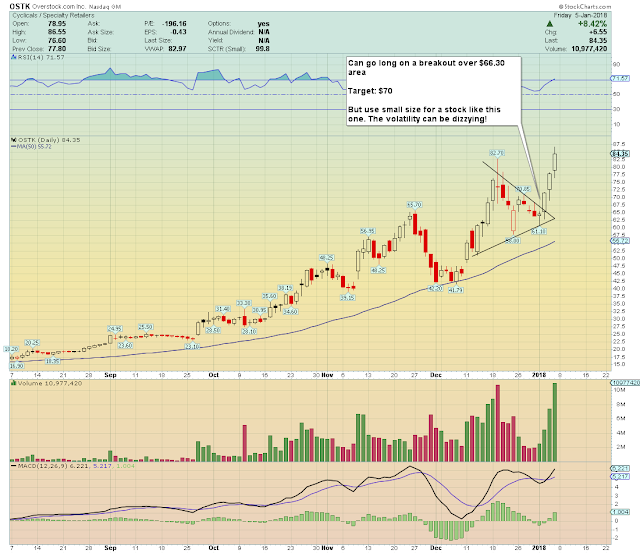 So hopefully, after reading this post, you'll have a little better idea of how to spot a "sleeping giant".... and always remember when the market puts some stocks to "sleep", it's doing that PURPOSELY....
so don't fall asleep and be on the lookout for "the calm before the storm".

As many of you know by now, what I LOVE most about these sorts of big EXPLOSIVE trades(like our ROKU trade from 2 weeks ago), is the feedback I get from both Art of Trading members and also my twitter followers when I do post a setup publicly!!

This is indeed my First trade in AOT. I'd like to thank you for all the educational videos on youtube. They are helping me to refine my trading style!

Don’t know how you do it Stewie but you just did it again! Thanks for the $1600! @traderstewie $ostk

Posted by Stewie at 3:40 PM No comments: