It's now been exactly 8 weeks since the market topped out, back in the 3rd week of September...
The market has been rather tricky to trade lately but it's becoming increasingly clear to me why that's been the case. The markets are usually most volatile and challenging to trade at major turning points as the balance of power slowly shifts from the "old guard" to the "new guard" .....
Picture a gigantic cargo tanker ship doing a 180 degree turn in the middle of the ocean.... 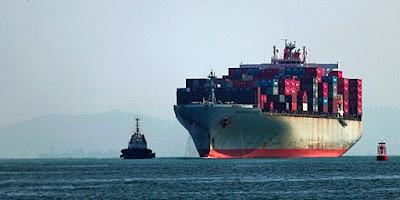 These "major market turning points" takes time and effort to accomplish and along the path, there's going to be a lot of brutal battles ardently fought out between the bulls and bears, each side fighting it out for every twist and turn, support and resistance levels on the charts....
but after a little while, you take a step back and look at the chart action, a more clear picture starts to emerge of what's happening....
I think we are at major crossroads here and i find this extremely fascinating since it's been over 9 years since the "FED induced" bull market was born in March 2009.... and now the FED seems intent on reversing their course.

A famous hedge fund legend from the 1980s, Marty Zweig was famous for saying: "follow the fed".

In my humblest of opinions, I believe we're in the early phases of a bear market here...
Now, bear markets come in all sorts of shapes and sizes, some are swift and dramatic and some are of the slow motion downwards grinding, "Chinese water torture" types.
Will this one be another 2008?! I have NO IDEA!... nobody knows! Nobody can tell you with absolute certainty how far down we go? or how long it lasts?
All this will be known in hindsight once we look back on it!

Having said that, as traders, we do not care about terminology... The actual terms "bear market" or "bull market" isn't important since we only care about trading price action, up or down... all we want is a trend to trade. In an up-trending market, most of your trades and gains will most likely be focused on the LONG side and in down-trending markets, most of your trades and gains will be focused on the SHORT side.

**Expect to see more and more AOT trade alerts being made in ETFs(such as that XLE short we made earlier this week for example).

At any rate, these are just some quick thoughts on the current market conditions I've seen up to now and if proven wrong down the road that this recent big pullback ends up merely being a bull market correction and the bull market resumes down the road, surely the charts will lead us down that path and we'll shuffle our feet to readjust!

Trade the charts, not opinions!

So the main purpose behind this weekend post was to discuss how come despite the big pullback in the last week or two, why is it that the NYMO(NYSE McClellan Oscillator) is nowhere near oversold?!  The Dow Jones fell almost 1,200 points this week, the Nasdaq fell almost 4.5%!!
So how is it that the NYMO and NAMO are still stuck in "neutral" and not closer to "oversold levels"?! 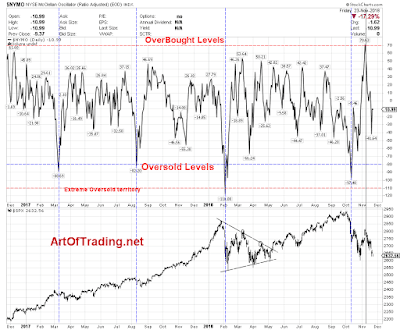 Now, that's a GREAT QUESTION! Does the NYMO work in bearish markets?!

The answer is YES!!    NYMO does work and works well actually!

However, since the tape has turned decisively more bearish, we need to look at the NYMO(or NAMO) in a slightly different angle.

As far as I'm concerned, the more meaningful signals we're going to get from the the McClellan Oscillators isn't necessarily from looking for "oversold" readings to go long, like we did during the last 8 to 9 year bull market..... in bearish tapes, the more meaningful signals will most likely come when the NYMO overshoots into "over-bought" territory and hence start looking to increase SHORT positions. That's when this tool is going to become quite useful. Just like what we saw in late November during that very strong market bounce and the NYMO went into "extreme overbought" territory and we started to look for short positions accordingly.
As you can clearly see in the above NYMO/NAMO charts, the market has pulled back quite aggressively ever since early November as the bears reasserted their dominance since that "extreme over-bought" signal.

Now, that doesn't mean that we're not going to get some useful signals when the NYMO get into "oversold" but since the tape has turned decisively bearish, the better signals will have to come on the rare occasions when the NYMO and NAMO get into "extreme oversold" and then start looking for hints of a snap back bounce(short squeeze rally)....

The NYMO might not get into extreme oversold often, even though, the market can and and has gone down big for multiple days in a row.

A great example of this phenomenon took place this week actually!! The markets took a BIG hit this week, Dow Jones fell about 1200 points, Nasdaq fell almost 4.5% yet the NYMO and NAMO remained in neutral and barely budged?! Weird huh?

This happens for TWO reasons, in my humble opinion...

1: This bearish trend is taking place via ROTATION. So basically the exact opposite of the phenomena we witnessed that kept the bull market going strong for 9 years, sector ROTATION! So for example, Energy sector tanks yet the Semis bounce. The Financials take a hit one day while Retail sector rallies.... it is this type of action that makes the market go down without affecting the NYMO much. The NYMO will usually make a material move one way or the other when we start seeing BROAD BASED moves in one direction but obviously when the selloffs are happening in a ROTATIONAL manner, the broad based aren't taking place... it is this very phenomenon that kept the bull market running, STRAIGHT UP for many years and that's what's made the market so impossible to short in any consistent manner in the last few years!

We are now witnessing ROTATION type selling, organized, controlled selling(distribution basically) without seeing much panic in terms of big mega spikes in the VIX(fear gauge).... it is this type of "controlled selling" that makes me think that we are for a prolonged pullback in the stock markets.

2: And this second point, just comes from years and years of watching the tape and seeing multiple bull and bear markets through out the years... I have been telling AOT members in the private twitter that "in strong downtrends, the bulls control the open but the bears control the close" .... and this week was a perfect illustration of this! 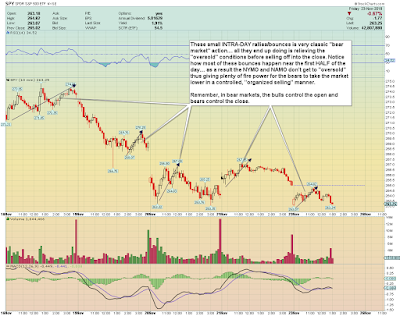 Notice in the above chart, the 5 day, intra-day charts of the SPY... notice how the market does NOT go straight DOWN.... (if it did go STRAIGHT DOWN, that's when the NYMO is most likely to get into "oversold" territory)... instead what we see is the market makes early morning or mid-day bounces, the market makes these almost pathetic attempts at rallies/bounces, usually at the open via a big gap up or early morning bounces but most of the time, these weak bounces end up dumping hard into the close..... these weak bounces in downtrends, only help to relieve oversold conditions from the previous bout of selling which only helps the bears sink their teeth in deeper just a little more each time...

It is these weak bounces that allows for the "controlled selling" to take place... these bounces will often make traders believe that the market is bottoming which sucks in longs only to pull the rug from underneath them and leaves them sitting on failed long positions.
All that small these small intra-day bounces end up doing is help relieve "oversold" conditions just enough from the previous bout of selling before stock prices roll over to the downside again... it is literally the EXACT OPPOSITE of what we witnessed during the +9 year mega bull market. We are now seeing this happen on downside. If you literally flip your charts upside down, it will be as clear as day light!

This "controlled selling" phenomenon was present during the 2007 market top and thru out the 2008 vicious bear market as well... the NYMO only got into "extreme oversold" only 2 or 3 times in 2008!! 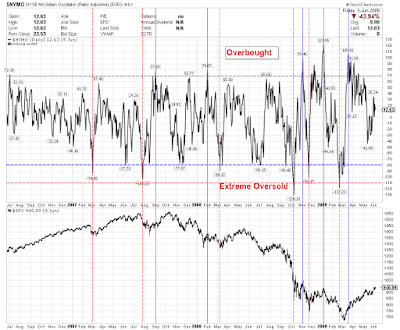 Important to emphasize, that this does NOT mean we're in for another 2008!! I'm not claiming this at all! But we appear to be in some sort of a deeper and/or perhaps even longer stock market correction phase than we've come to get used to in recent years. Trading opportunities, on long side and short side will be abundant and many opportunities will be created for traders and investors of all sorts in due time!

Happy trading!
Posted by Stewie at 2:27 PM No comments: