How To Trade AOT Setups When Working Full Time!

Art Of Trading member, Zach @87Alwaysred , who some of you know from communicating with him every day in the @AOTtrades private twitter feed has BRILLIANTLY and most importantly generously/selflessly took time from his very busy work schedule to write this "guide" on how he trades the AOT setups! He asked me to share it with other AOT members who work other full-time jobs but still have that passion for trading and want to incorporate trading into their busy work schedule!

Zach, lays out HOW he does it, gives examples and gives you some good ideas and will surely inspire you!

I've made up an easy to follow and easy to understand short "guide" on how to trade your setups if you work full time. I hope this can help a few people out!

As always, you effin ROCK stew!

How you Could Trade AOT Setups if you Work Full Time

STEP #1: (Trading Plan) Identify and study all of the setups that are contained within the daily emails. From the list of setups identify the stocks and setups that you want to trade!
STEP #2: (Look at the Previous Day Low) Stew usually sets his stops just below the previous day low if the trigger is tight and, in some cases, (ZTO from today for example) The stop was set at the current days low.
STEP #3: (Get a Feel for the Name) Using the charts that stew provides in the daily emails look at the way the name has traded in the past. More importantly take note of the price action from the day previous. Ask yourself; How big was the previous days price swing? Am I comfortable holding full size on this name? How “tight” is the setup on this name? How far off is the “trigger” from the previous days range? These are things I look at when “planning my trades". 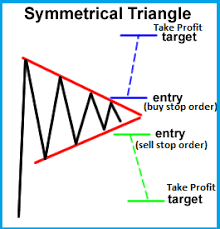 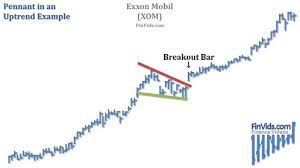 STEP #4: (Managing Your Capital Responsibly) After Identifying the setups you feel comfortable with trading you must allocate the capital and set the risk you are willing to put forward in order to enter the trade. If you work full time entering names with a 4% - 5% downside risk isn’t a good idea. These names are better played if they are “managed”, meaning tiered buy ins and updated stops through out the day if necessary. The names you want to trade are names with 1.5% - 3% down side risk. The reason for trading names with lower downside risk is because you can allocate “normal size” to these trades and feel comfortable entering the position. If you want to trade names with higher volatility and don’t care for the management side of things only ever enter “half size”. If you enter “half size” on 4% - 5% downside risk names the “loss” will feel the same as a full size 1.5% - 3% risk name. Let’s use $10 000 as full size for example ($10K FULL with 1.5% - 3% downside risk is $150 - $300 loss) if you project that same idea over to a higher volatility name ($5K HALF with a 4% - 5% downside risk is $200 - $250 loss).

EXAMPLES OF SETUPS THAT ARE “EASY” TO TRADE 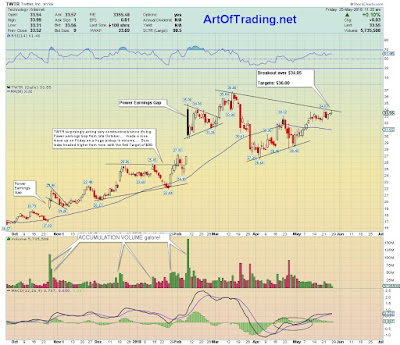 This TWTR setup above would be easy to trade for a few reasons.
Reason #1: The chart consolidation just under the breakout/entry point is pretty tight.
The previous day's action was very narrow! 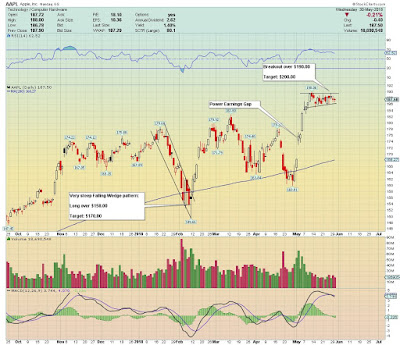 This AAPL setup above would be easy to trade for a few reasons.
Reason #1: The chart is tight. The previous days action was very narrow.
Reason #2: Down side risk within the trade would be in the 1.5% - 3% loss range.
Reason #3: APPL is a slow-moving stock. The name only gets volatile with news on the name or MAJOR MARKET UNCERTAINTY. The trade either works or it doesn’t. No managing.

In the following charts identify reasons why these setups are easy to trade? Can you find anything within these charts that I haven’t mentioned? If so share them with other members over at AOT! 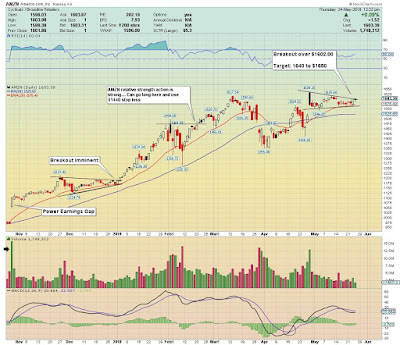 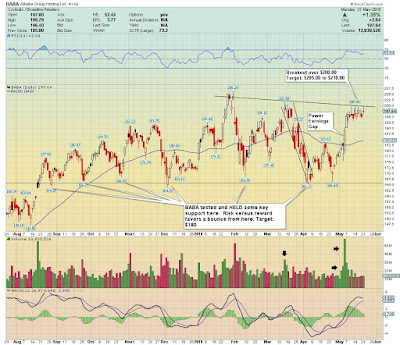 I've been meaning to do a post of this kind for a while now....

One "trick" I often use when plotting charts for the overall market, i.e. SPY, QQQ, IWM etc

I not only look at the DAILY or weekly charts to try and gauge what's going on with the "overall big picture" to hopefully try and spot PATTERNS, trade-able, actionable patterns like "CUP and HANDLE" patterns, "Head and Shoulder patterns", "Inverse Head and Shoulder" patterns, Falling Wedge patterns, Bull Flag patterns etc...

But, most importantly, I also use SMALLER time frames such as 60 and 30 minute time frames to try and spot HIDDEN patterns that aren't visible by the "naked eye" when looking at the Daily or Weekly time frame charts!! Smaller time frame allows you to zoom down, just like a microscope and look at the "DNA"(genetic make-up) of the chart if you will !! If you know what i mean?!

Take a look at the attached SPY chart below: AOT members who visit the 'Power Earnings Gap'(PEG) watchlist often probably recognize this chart! I've kept it and keep on there permanently! Even posted it on twitter a few  times.... 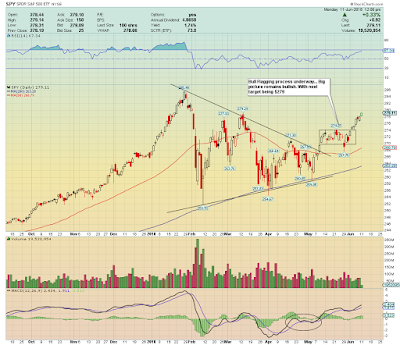 So if you saw the above chart in the PEG watchlist, then chances are you probably saw this SPY chart attached below as well !!

It's the SMALLER TIME chart of the SPY: the 30 minute time frame chart to be exact! 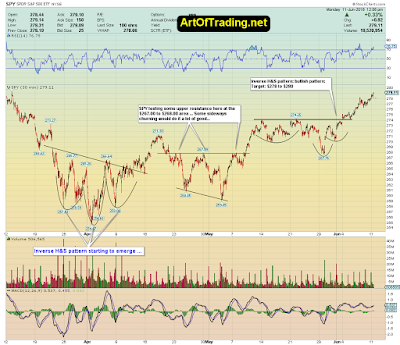 Note, the CLEAR bottoming "Inverse HEAD and SHOULDER" bottoming pattern that emerged back in early April !

As a matter of fact, I was using this chart/ this exact bottoming pattern, that was only truly visible using the 30 minute charts to move out from 100% cash and start to play more LONGS at that time ..... notice how difficult it is to see that "Inverse HEAD and SHOULDER" bottoming pattern on the DAILY charts! Actually, the daily chart during the late march to early April time looked like a COMPLETE mess!

But once you zoom down into the smaller time frames you've just uncovered a beauty of a bottoming pattern and boy oh boy, did it ever play out!

I urge you all(every single trader) to add this KILLER weapon to your trading arsenal, folks!

Use SMALLER time frames(15, 30, 60 minute charts) to unlock hidden patterns that aren't visible on the daily/weekly charts! Get that EDGE!
"The edge", a thing that so many traders talk about and want is often found in the smaller time frames!

This is a great way to spot and get into patterns ahead of the masses because you were shrewd enough to zoom down into the smaller time frames and do some "gum-shoe" detective work!