..... well today, we're going to discuss in detail what this means exactly and how this simple concept can be so incredibly effective!!

So here we go!


Last Thursday evening as i was doing my NIGHTLY scans for Art Of Trading(AoT) members, WATT caught my attention as i was scanning my 'Power Earnings Gaps' watchlist.

Here's the original setup that caught my eyes and that's the exact setup that was sent to AoT members Thursday evening as a stock to watch the next day! And actually i liked this WATT setup so much, i actually made it the 'AoT Top Pick'! 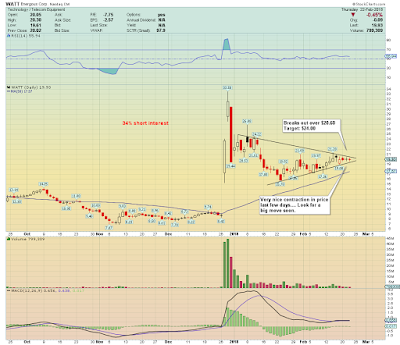 What does that mean? And why does this "simple" concept matter here for this WATT chart??

Well, let's analyze this WATT chart closely for a minute!

First of all, notice the HUGE, almost ridiculous 2 powerful spikes up(huge "volatility expansion") in late December 2017. Major news was announced for that company!

After such a big 2 day move, WATT needed to digest that huge move and it did that by pulling back quite a bit in Jan. 2018..... And come Feb. 2018, WATT went into a "volatility contraction" period as the price action on the intra-day ranges became smaller and smaller, contracting into smaller and smaller minuscule candles.... in essence, the stock became more "BORING"!!!

Perhaps it become "boring" to the untrained eye!!


Especially note, the trading action in that WATT chart in the last 3 or 4 days in the above chart! It almost appeared as if WATT went into a "coma" like state....

Well, guess what, this's actually the exact time to PAY ATTENTION to that WATT chart and NOT SWITCH OFF!!


Why? What is so interesting about that "Boring" ass chart, Stewie?!!

Why on earth would you even make this stock the "AoT Top Pick" for that matter??

It's time to pay attention because "FROM CONTRACTION COMES EXPANSION"!

In other words, after the last few days' mini, sideways, smallish and "boring" price movement in WATT, this stock is about to wake up in a big way!

Keep in mind, after periods of mini, coiling and narrowing price action(aka, low volatility), stocks will often explode or surge in volatility!!

This trading concept is actually similar to that last Blog Post i made called:

"The Calm Before The Storm"

When a stock with over 30% short interest goes into "CONTRACTION" mode and is gearing up for "EXPANSION" mode.... get ready to see something awesome!!


10 minutes after the opening bell on Friday morning, I sent out this tweet to AoT members.... 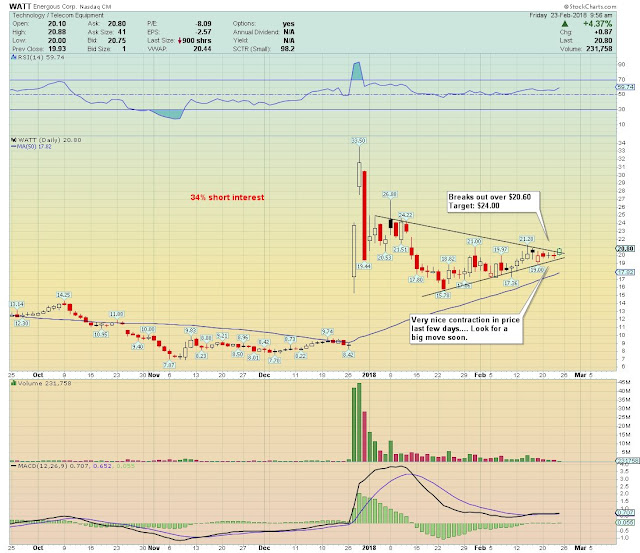 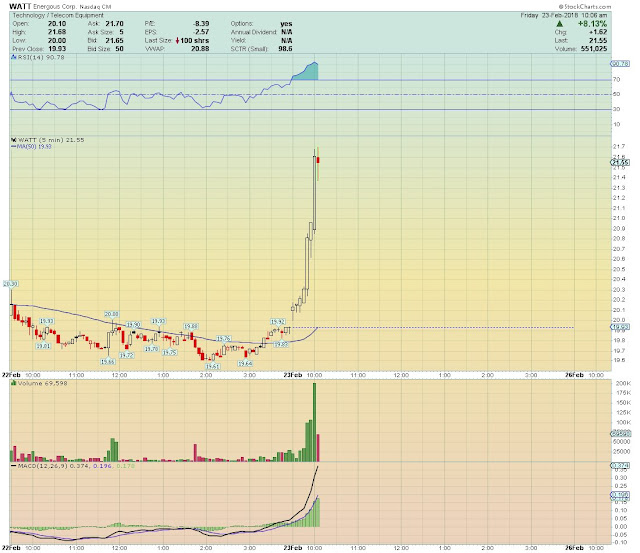 
About an hour later, and after seeing WATT continue to steadily climb strongly higher, it was time to move stops up and protect some gains!!

So this tweet was sent to Art Of Trading members: 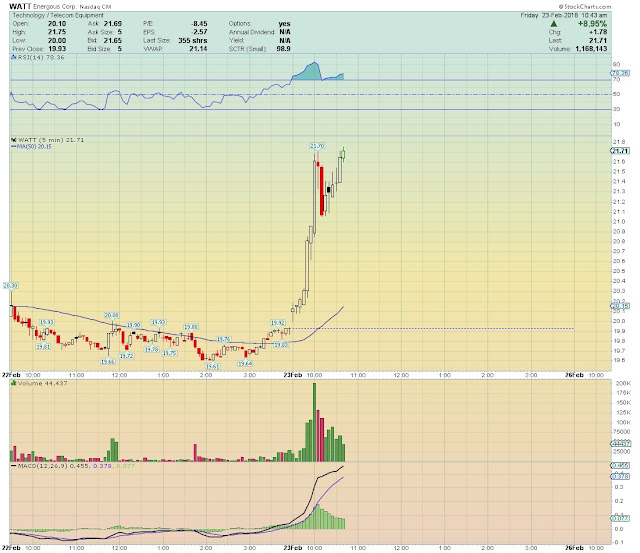 
WATT offered a new entry intra-day as it formed a BULL FLAG pattern.... 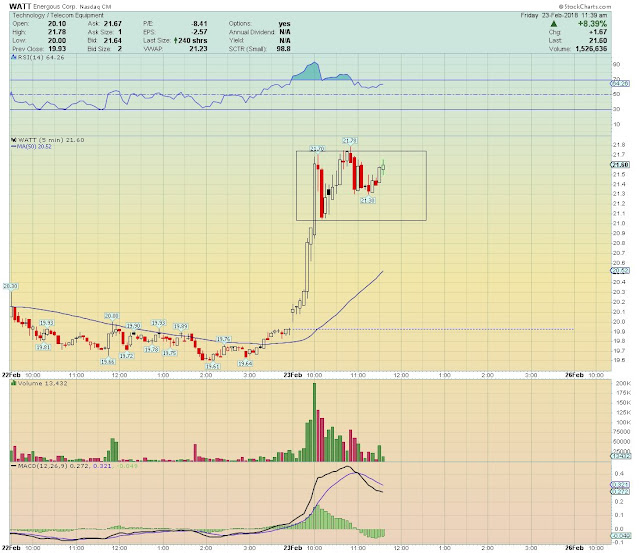 A few minutes later....WATT took out that intra-day BULL FLAG and never looked back!

Breaking out thru that "bull flag"... Stock looks very hyper and angry today! 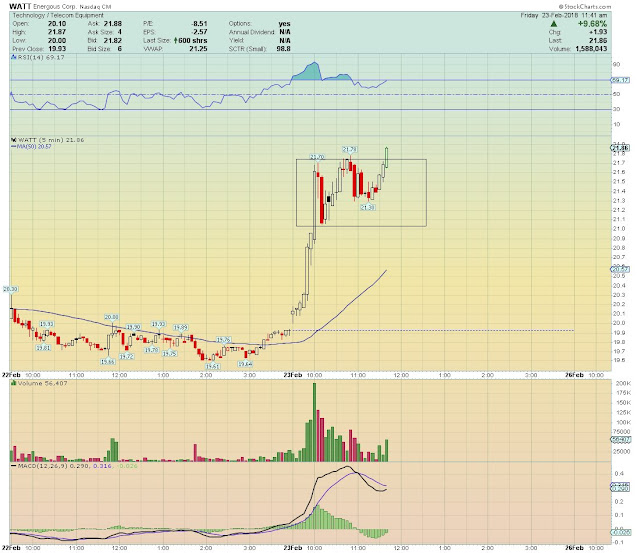 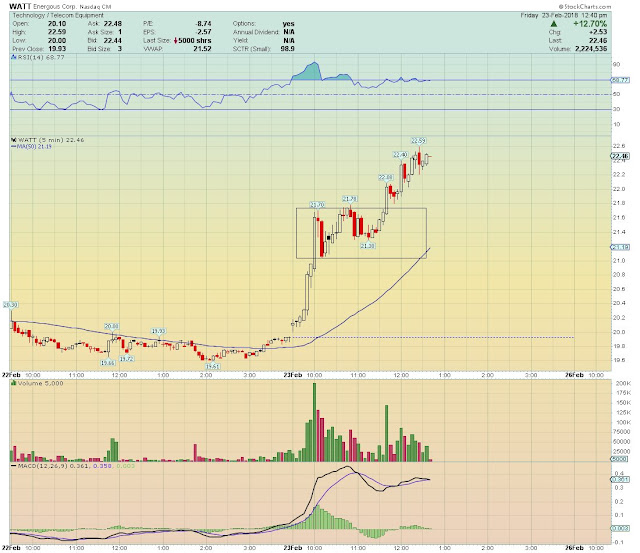 And for those of you who are still holding WATT(AOT Top Pick) for today...the stoploss has now been moved to $22.00 and as long as we don't stop out today I do intend to swing trade this one into next week! If you missed it, don't beat yourself up just be ready for the next one! 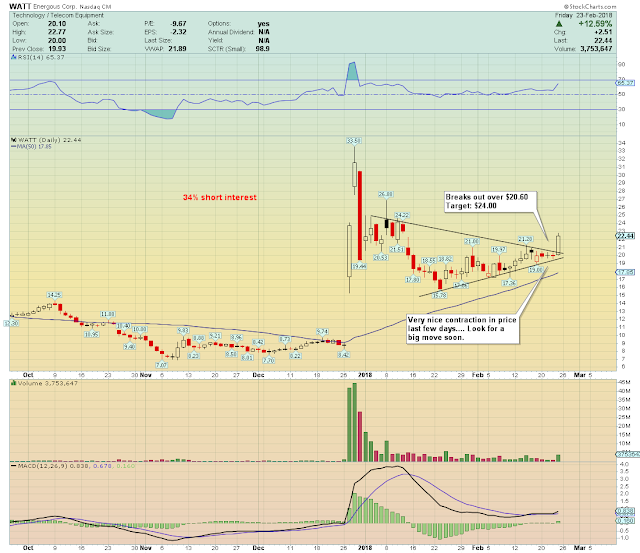 As you can see, WATT had a nice strong move the whole day from start to finish pretty much after 3 or 4 days of "CONTRACTION" exploded into an nice "EXPANSION" move higher which was good for a cool +12% move!


Finishing up this post on a Monday morning since we were swinging WATT .... 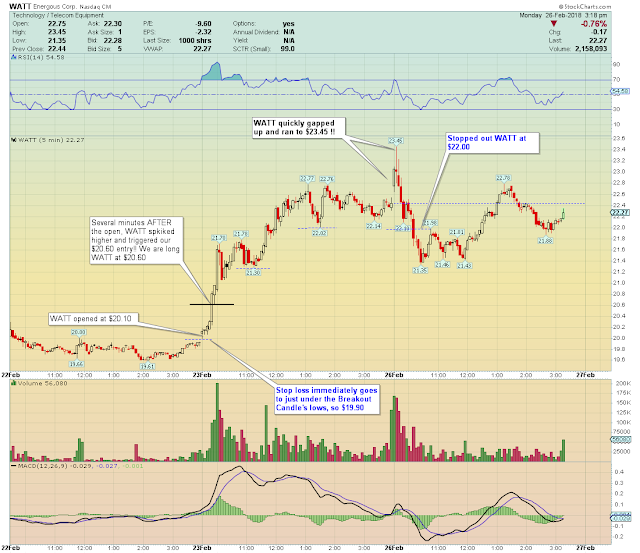 Now, we focus on the next trade!

As usual, my favorite part of all this is the feedback i get from
Art of Trading members and also my twitter followers!!

Replying to @AOTtrades
Thanks. Glad I joined AOT. Totally worth the knowledge you spread around in this community. Lifetime skills.
1 reply2 retweets7 likes

Replying to @AOTtrades
EC and WATT my two first trade with you guys(Art Of Trading). Nice...

Replying to @traderstewie
Thanks Stewie - (lots of Love !!) Calling this a win

Replying to @AOTtrades
I got in later but still up of 5.5% great call. Almost paid for the year on this one trade

Replying to @traderstewie
you called it, and should get the credit! nicely done, and glad i saw this “in time” 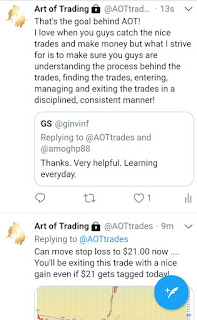 Posted by Stewie at 1:10 PM No comments: