WHERE THERE'S SMOKE THERE IS FIRE! 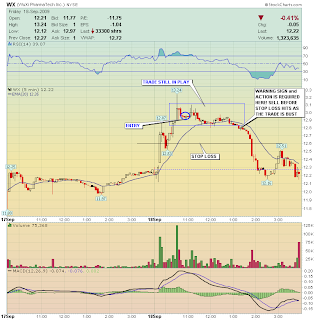 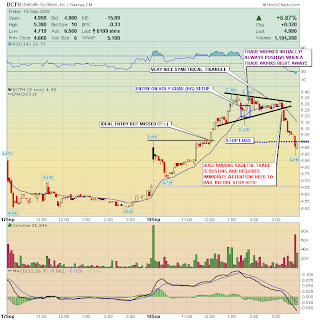 Been doing a lot of thinking of today and i wanted to do an email post about losing trades. Most traders only talk about their winning trades and how much they made on a trade, that's great but today i wanted to touch on a very important issue: losing trades. If you are a trader then you need to expect losses. It's the reality of trading and it's the price of admission to this game we all love. Managing losing trades will determine your fate and staying power. Today i will not talk about my winning trades much, i already did enough posts about these. Winning trades work RIGHT AWAY....that's the bottom line. Perfect example look at HAR yesterday!! I saw the setup after a member called it out, took a look at it and i said "BUY THIS NOW!!" There was no question in my head HAR was going higher! see chart for details.

NOW ON TO LOSING TRADES: WHERE THERE IS SMOKE THERE IS FIRE!! WHEN A TRADE STARTS TO BUST YOU WILL KNOW IT, YOUR MIND STARTS TO QUESTION THE MOVE AND IMMEDIATELY AFTER YOU WILL GET AN UNCOMFORTABLE FEELING IN YOUR STOMACH AND ANXIETY STARTS TO BUILD AS PRICE ACTION STARTS TO GO AGAINST YOU AND THE PATTERN STARTS TO SLOWLY BREAK AGAINST YOU. AS THIS POINT YOU IN ESSENCE FIGHTING THE TREND AS TREND STARTS TO SHIFT ON YOU.

This requires attention and action! See charts for detailed explanations on losing trade management. Trade like a SMOKE DETECTOR because where there is smoke, there is fire and sometimes as traders we need to bail before the stop loss hits!!

Thanks for the great post... Loosing is a very real part of trading and its great to have a post on it. Have a good weekend.

Hey,My 2 cents. Good weekend for you Sir.
Indicador until now at yellow alert very close red line. If we compare with other movements can still expect a test red line so mybe top medium ou long term between 1105 ( Major Trend) or 1120 (retracement 50%).After that I expect a drop until http://followmarketrend.blogspot.com/2009/09/spx.html

Stewie, EDN is confirming the breakout.

indeed, i see that and volume very strong too.

Appreciate the examples for 'when to let go', or 'race to beat the stops'.

What made you decide to sell HAR when you did? Did you have a preset sell price, notice RSI peaking, or what?

hi cliff. i just had a modest target of 33 on HAR. that's all. Kinda got lucky that was the actual top on the stock.