An Example Of Why Inverse ETFs are Trading Vehicles ONLY 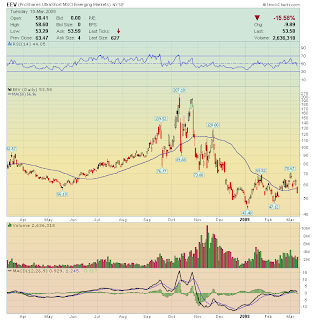 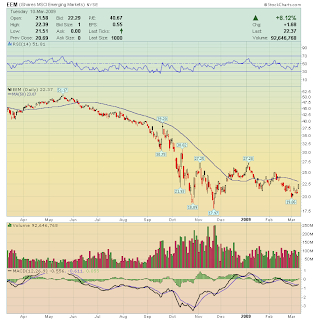 Do not intiate long term trades using these inverse etfs. They are only a play on short term volatility and that's it. Check out EEM chart and EEV. EEM is the MSCI Merging markets Ishares and it's Inverse ETF is EEV. Look at the two charts.

Clearly, just like the rest of the market EEM took a pounding and was is down over 50% over the past year. Now, look at EEV, it should be UP a lot, right? WRONG. It is actually down over the past year. Yes, there were periods where EEV scored some super nice short term traders but if you went LONG the EEV after correctly concluding that EEM would take a beating, you were right on EEM but dead wrong by using the EEV ETF to capitalize on this analysis.

Conclusion: These inverse ETFs are for very short term directional moves ONLY.
WARNING: Once you realize that you are caught on the wrong side of these inverse ETF trades: GET OUT asap and ask questions later because once they move, they MOVE FAST and they MOVE BIG. Scratch the trade and protect your capital.

Stewie- What did you do with FAZ long since yesterday?

i got rid of it right at the open. i was down big on it eventho i only had 200 shrs. but as soon as i realized that this mrkt and the fins had legs today, i went with 6000 FAS and cut down losses on the PnL. so i closed down today but being proactive and cutting the FAZ loss quickly and swicthing my stance quickly helped me cut the loss on the day quite a bit. i am rather happy with my trading today.

You are the best! Big fan of your trading man.